Cam has spent the last 35 years in the field of leadership development working globally with business and not-for-profit leaders in the Americas, Europe, Africa, and Asia. With his partner, Dr. Pamela Fuhrmann, he is co-founder of the Conscious Leadership Institute and the Anima Mundi Project. Cam has designed, developed, and delivered programs, workshops, and retreats for many wellknown organizations and universities, including The Nature Conservancy, NASA, SCOR, Volvo Group, Brambles, Ingersoll-Rand, the University of Notre Dame, the University of North Carolina, and Indiana University. He has conducted research on the value of higher education for individuals and their communities, on the role and function of corporate universities and corporate learning strategies, and on the effect of long-term meditation practices in developing leaders. In addition to the companies he has co-founded, Cam is on the faculty of the European Center for Executive Development (CEDEP) in Fontainebleau, France and a Professor of Practice at the Johannesburg Business School at the University of Johannesburg, South Africa. Cam has always heeded the call to adventure. His early formative experiences were hiking and camping in landscapes across the western half of the United States. His love of nature fed his imagination and his desire to explore different environments and cultures. He has traveled extensively in many different roles. His first international trip took him to the Soviet Union in 1985 as a member of a US delegation in dialogue with a Soviet delegation just prior to the first summit between Reagan/Gorbachev. Since then, he has continually expanded his connection with people and nature around the world. Cam and Pamela have lived in France, England, and currently, maintain residences in the Netherlands and the US. Another formative experience was Cam’s studies in the Integrated Humanities Program at the University of Kansas and serving later as an assistant instructor in the program. This introduction to great works of literature, history, philosophy, and religion reinforced the sense of wonder that has been core to his work and the diversity of his experiences. His early foray in leadership began as an officer in the US Air Force, and over the course of his brief military career, he was a Navigator, a Squadron Commander, and a Wing Executive Officer. Education was always Cam’s calling and while at Indiana University in a graduate program in English Literature, he became a speech writer for the President of Indiana University before spending 20 years helping launch and lead the office of executive education for the Kelley School of Business. Behind the notion of education for Cam is a love of learning and a desire to explore new horizons, which is why he and Pamela have been independent consultants and entrepreneurs for the last 15 years. 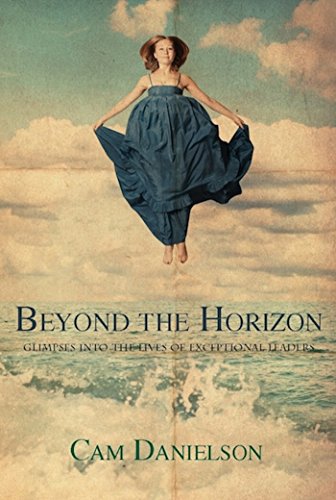 Beyond the Horizon: Glimpses Into the Lives of Exceptional Leaders